Our Great Lakes Division's Warrant Officer Alex Macleod was awarded “Security Guard of the Year” during ASIS Toronto. The ceremony was held Thursday, October 19, 2017, as part of the Law Enforcement and Security Practitioners Awards luncheon at the Toronto Congress Centre, in partnership with the CANASA Security Canada Central show. This prestigious award recognizes the achievements and exemplary service of a front-line security guard.

Alex Macleod is a veteran of the Canadian Armed Forces and has served as a Site Supervisor for CGL at a Federal Government post for over 10 years, with distinction. Alex consistently goes above and beyond in the performance of his duties, and has an intrinsic understanding of our clients' needs.

Alex was nominated not only because of his consistent excellence over the years, but also his strategic contribution during the call-up for the Syrian Refugee project. The project required CGL to provide a security contingent at a special Toronto Pearson airfield designated for flights carrying refugees from Syria to Canada as part of our country's support for the humanitarian crisis. Alex was our Great Lakes Division's first choice to lead the security team. He didn't hesitate to accept the call-up despite having only three days to prepare. 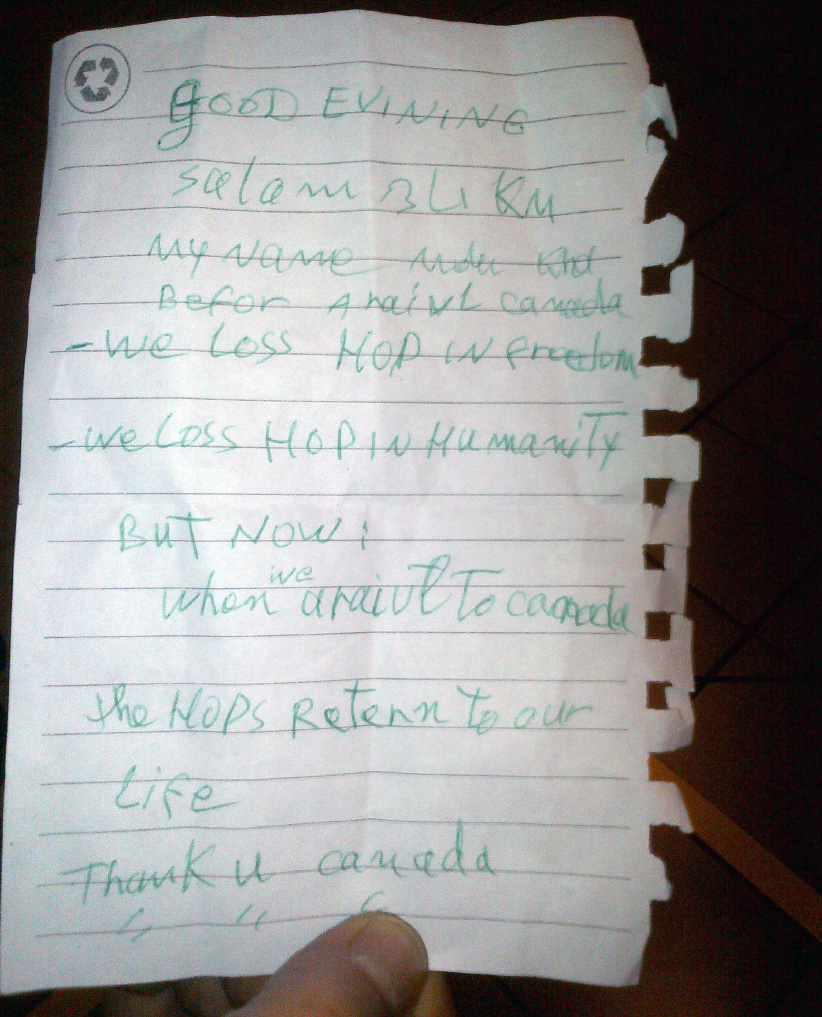 Security was a key element of bringing the refugees to their new country, particularly given the use of an infield terminal. Also, the refugee effort attracted significant media and public attention of the daily incoming flights. Alex supervised a large staff for three months, including holidays. He led his group with excellence, exhibiting tremendous flexibility and agility as security parameters changed regularly.

"Our role was to provide security for the infield terminal. I was on the lower level, right near a window where we could see the nose of the plane coming toward the building. It was an exciting moment.” Alex said. "[The first gentleman] wasn’t speaking English so I couldn’t understand what he was saying, but he was smiling and positive. I shook his hand and then he handed me this letter (pictured). It took me a minute or two to decipher what he was saying. I was quite moved by it." He explained, "It was so far from my reality that it was really hard for me to absorb. It sort of stopped me in my tracks, and I didn’t stop thinking about it for a very long time. To hear that he had given up hope, the situation stopped being something that was distant—a war in another country—and became something that was right here in my face."

Alex Macleod exemplifies the true spirit of a commissionaire -- more than just a security professional. He conducts himself and his team with precision, consistency, tact and great customer service. His dedication and professionalism contribute greatly our reputation. We thank him for his commitment for and helping make our organization a Forbes Employer of First Choice!