NAB Division recognized two recent recipients of its “Employee of the Month” award in the January edition of its employee newsletter.

On October 20, 2018, commissionaire Vivian Elzen noticed a suspicious man enter the Epcor Tower and get onto an elevator. Using the tools at her disposal, she tracked him until he got off the elevator and monitored his actions while inside the building. Noticing the man was impaired and acting in an aggressive manner, Vivian acted quickly to get the man out of the building. She maintained her composure and was able to keep the situation under control until the individual left the site. Her actions and professionalism kept this situation from escalating.

Commissionaire Suzanne Lemire’s professionalism was evident during an event at a client site in August. A local crisis diversion team was dispatched to deal with an at-risk member of the community in distress in the area where Suzanne was working. Suzanne met the team and assisted in the response. She assessed the situation, was aware of available community resources and facilitated a successful outcome.

Both women demonstrated empathy and vigilance, hallmarks of the quality of service that is being provided daily by the more than 22,000 men and women of Commissionaires across the country. NAB Division CEO John Slater presented both with an Employee of the Month recognition award. 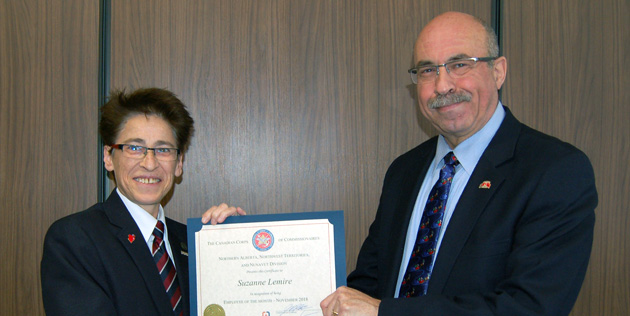