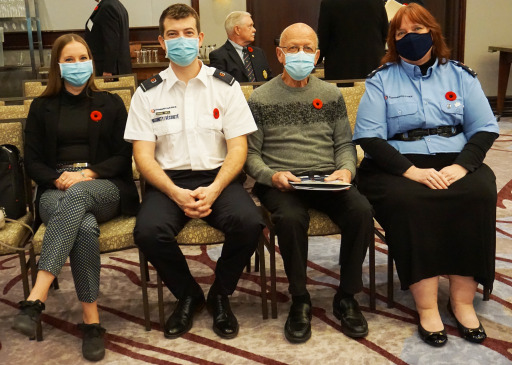 British Columbia (BC) Division’s Sherry Molnar, who serves as Castlegar RCMP Detachment Detention Guard Supervisor, was named Commissionaire Supervisor of the Year, and Great Lakes (CGL) Division’s James Durand-Smith, who serves as a Toronto Court Administrative Services (CAS) officer, was named Commissionaire of the Year. Both recipients were hosted, along with a guest, in Ottawa during the Federation’s Nov. 3-6 fall meetings. Throughout this period, the winners and their guests were hosted at various National Capital cultural and social venues, and were the guests of honour at award events.

“Commissionaires is like a second family to me and I just love being a part of this organization,” Molnar said at the award presentation in Ottawa. Her outstanding leadership, support, training, and managerial skills, along with her contribution to her community through volunteer work, set her above the rest.

Durand-Smith is a Canadian Armed Forces veteran and, in addition to working as a commissionaire, volunteers as a member of Global Medic, a Canadian charity. He was recognized for his professionalism and the ability to work effectively under pressure, all of which makes him an ideal commissionaire role model. “We aren’t just sitting at a desk, we are communicating with the public, handling emergency situations and pulling together resources to respond,” Durand-Smith said of his work.

As a not-for-profit organization with a veteran-focused social mandate, Commissionaires is dedicated to giving back to its employees. Over 85 per cent of our revenue is driven back to our members, veterans and non-veterans alike, by operating a thriving, self-sustaining enterprise.